Just like in any other country, advertising in Brazil brings very positive results. However, it is important to understand the regulations and restrictions for advertising in the country.

Advertisement in Brazil was born in the big cities, when many different services were concentrated and needed to draw people's attention. It has initially started on the newspapers, then was extended to magazines, radio, TV and now to the internet.

The advertisement industry cannot be separated from the media, the business and the production sectors. There are some restrictions about what is legal, what was legal and what was never legal to advertise in Brazil.

In Brazil, it is common to hear about some election candidates that bought votes or have made an illegal campaign. In Brazil there are several laws about what is allowed and what is forbidden to do in an election campaign, including very rigid rules about advertisement.

1 - It is completely forbidden to make use or distribute any material such as T-shirts, K-chains, hats, gifts , “cestas básicas” or anything that could be related as a gift being used to buy votes.

2 – It is completely forbidden to advertise on billboards or even promote the called “Showmícios”, what in Portuguese is a mix of the word “Show” and the word “rally”, which are those rallies where famous people make free performances or show any support to the political candidate, directly influencing the electorate.

3 – Election candidates are prohibited of spending more than the average spent on advertisement over the last three years.

In Brazil, there are many restrictions for the advertisement of alcoholic beverages and also cigarettes. Place, time and what can be presented on their campaigns are regulated by law.

According to the law that regulates these products advertisement, alcoholic beverages can only advertise on TV in a specific time, from 9:00pm until 6:00am.

Since 2000, the advertisement of cigarettes was forbidden anywhere except on their selling points and parties, what explains why nowadays cigarettes advertise in parties where young people meet. Another important point about the cigarettes is the mandatory warning about the harm caused by smoking that cigarettes boxes and also it's advertisement must display. 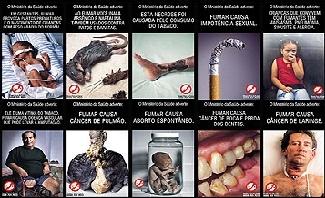 Some politics wants the same destiny for alcoholic beverages, restricting their advertisement for the sales point. This measure is mainly for beer, alcoholic beverage most consumed by Brazilians, but there is a strong discussion about that, and it seems that it will not change soon.

São Paulo was the first city that decided to exclude billboards from their streets. Called “Cidade Limpa” - or “clean city” in free translation -, the measure removed and also prohibited the bilboard advertisement.

The measure includes also sheets of paper, panels, painted walls, among other means, all prohibited from January 1st, 2007.The project also prohibits the display of this material in taxis, buses, bicycles, trailers and aircraft.

At first, many people complained about the measure due to the decrease in jobs, but after some time, the major part of São Paulo population agreed with the new rules, once the visual pollution disappeared significantly (there are other illegal posters that continue polluting streets).

After São Paulo, many cities have decided to adhere the measure, and other are still voting the law, even when not applying them completely. Rio de Janeiro, for example, prohibited billboards on the city’s center in order to preserve the historical place.

There are also rules for medical advertisement. In 2012 there were made some changes about the kind of advertisement in which doctors can participate.

The medical association cannot make advertisements or even support products related to health as vegetable creams for cholesterol, repellents antibacterial soaps and so forth. Another restriction is that medical advertisements cannot use expressions as “the best” or “guaranteed result”

It is vetoed the use of “before and after” images as a way to expose the results of aesthetic treatments or also plastic surgeries.

There is another interesting rule about doctors and their social networks. It is completely forbidden to available their chamber telephone number on Twitter or Facebook profiles.

Since 2003 there is a law prohibiting sex services providers to advertise on public communication vehicles. Newspapers and magazines can advertise sex services but they must be presented sealed with a warning about the content to be presented.

Something really common to see in big cities of Brazil is prostitute telephone numbers glued on public phones on major streets such as Avenida Paulista, in São Paulo. In 2012, the police has started to call these numbers and arrested those people on charges of indecent assault.