The cattle industry in Brazil is the economic activity that occupies the largest land expansion. Brazil has the second largest herd in the world, only surpassed by India.

The Importance of Cattle Industry to Brazil

Brazil has historically been one of the biggest producers of bovine meat and in the last five years, the largest exporter of cattle meat in the world. According to FAO, the Food and Agriculture Organization of the United Nations, one in each five pounds of commercialized cattle meat is from Brazil. The exported volume achieved 264 822 tons in 2012, and generated USD 1.220,316 million in exports. The rest of the production supplies the domestic market.

In the social aspect, cattle beef industry generates about 360 000 direct jobs as well as thousands of jobs among inputs suppliers, moving almost USD 2 billion in domestic inputs. Summarizing, the cattle beef industry in the country is important to the domestic consumption and for Brazilian economy due to exports and employment creation.

In the past, the Brazilian pastures expansion occurred mostly in unoccupied lands, such as São Paulo, Goiás and Mato Grosso, where the expansion continued to develop for a long time.

In the 70s, the national herd increased by 5% per year, being more expressive in cultivated pastures areas and in the North and Midwest regions. This trend continued in the 80s, when the Midwest achieved the largest cattle herd of the country. The Amazon rainforest was also an exploration target due to good pasture quality, high productivity and low price of the land.

The southern areas of Brazil are great producers of meat and dairy products. This region is responsible for exporting meat to Mercosul countries and to the Middle East, China and the United States. In the Southeast, export is also a practice. 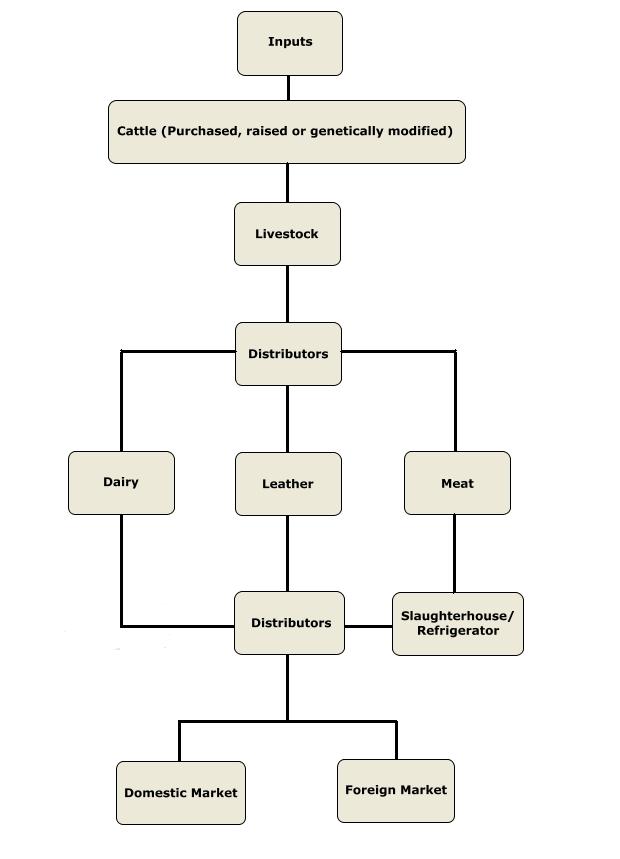 There are a wide number of types of cattle: beef cattle are bred to yield large amounts of high quality meat, while dairy cattle have been bred to deliver copious milk with a high butterfat content. Draft cattle are bred to be working animals. Multipurpose cattle can perform two or all three of these tasks, depending on the breed.

The Brazilian cattle market is very large: even with India and China presenting the biggest beef herds in the world, Brazil is the country that has the biggest commercial one. Over 80% of the Brazilian animals correspond to Zebu breeds and the rest to taurine breeds.

Between the Zebu herds in Brazil, Nelore is the breed that corresponds to 90% of these animals. The concentration of Zebu cattle stretches all over the country territory, while the southern regions in Brazil, such as Santa Catarina, Paraná and Rio Grande do Sul are occupied by the Taurine type of cattle.

Zebu, specially Nelore, has a great resistance to heat, which allowed this breed to live in tropical and subtropical regions. Their efficiency in producing beef in such conditions, as well as their capacity of adaptation in the extractive livestock, is responsible for the large quantity of this type of cattle in the Brazilian territory.

The taurine breeds also have very interesting characteristics for beef cattle, such as the quality of their beef, which has excellent finishing of fat (fat thickness) and a reproductive life that starts very early, which allows the producer to expand the herd very quickly.

Genetic improvement had become a growing phenomenon in the Brazilian cattle industry. The main advantage in working with the genetic selection is the unification of already existing breeds, creating a new type of cattle composed by breeds' best characteristics. The crossing between the taurine and zebu is already a current practice in the country, in order to produce a beef with excellent quality.