One of the main criticisms regarding the Brazilian Taxation is its extremely heavy burden on consumption.This article will provide information about the taxes inlaid on the products' price and how it harms both consumers and companies.

About 55% off all the money collected by the government comes from consumption taxes, and it is quite easy to know why: not everyone in Brazil pays Income Tax or taxes levied on properties, but every single Brazilian is a buyer. Also, the consumption taxes all together have a much higher rate than the Property or Income taxes.

With alarming income concentration and social inequality levels, Brazil continues to overtax the consumption, affecting directly the most impoverished people. As the consumption taxes are the same for all people, regardless on their income, the poorest ones pay way more taxes than the richest, if we think of some proportions.

A person that is paid up to two minimum wages (BRL 1244,00) spend about 48,3% of the salary on taxes. On the other hand, someone with a thirty minimum salary (BRL 18.660,00) pays 26,3% of it on taxes. Adds to that the fact that poor people actually spend all their salaries to live, while the riches save money and invest with their wages, what increases even more their wealth and, consequently, the income concentration.

In Brazil, all the products for sale in a supermarket or shopping mall, for instance, are subjected to consumption taxes. There are no complete exemptions, not even for basic needs. However, every now and then, the Government adopts some measures to encourage consumption and protect the national industry. As an example, we can quote the exemption and reduction of some taxes for house appliances, cars, motorcycles, trucks, building materials, wheat flour and computer goods.

Overall, the main Brazilian taxes and contributions levied on consumption are:

Aside from those taxes, there are other several fees charged on companies that are transferred to the consumers influencing the final price of the products. Actually, the Brazilian Tax structure is so confusing that it is impossible to determine the exact value of the taxes included in the final cost of each product. it is only possible to make some estimations, as you can check on the table in the end of this article.

Taxes for this? Really?

According to a research made by the National Industries Federation of São Paulo (Fiesp), about 80% of the Brazilian people have absolutely no idea of how much tax they pay on their purchases. But apparently that unawareness is not due to neglect. The whole tax structure in Brazil is composed of indirect and disguised collections, so the buyer will not know how much tax a determined product brings inlaid on its final price.

The Government still do not oblige the suppliers and establishments to give information about taxes on their products' price tags. Also, most of the invoices provided by Brazilian stores do not contain any information about the taxes percentage charged on the products. And when the invoices inform something about the taxes inlaid in the purchase, it comes in accountability codes, completely impossible for most people to understand. Down below, you can see how the Brazilian invoice looks like (no information regarding taxes): 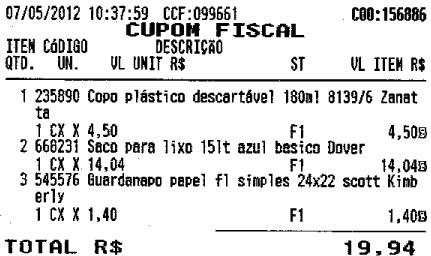 If on the one hand there is absolutely no transparency to consumers, on the other hand there are no consumers for transparency. Despite the efforts of some groups, most of Brazilians are still not engaged with a political attitude towards pressuring the government for more transparency in consumption taxation.

Nevertheless, there are some interesting projects like the Feirão do Imposto (Taxes Fair), where people get together to sail and purchase several goods with tax free. The Fair is administrated by young entrepreneurs and it comes as an initiative to inform the population about the high tax burden on consumption. There are also some websites, like the Dieta do "Impostão" and "Hora de Agir", that put right in the open how much the Brazilians are paying in consumption taxes.

Those mobilizations also come to advert that Brazil is a country where people get poor return of their taxes. Even though the population are not mobilizing enough, the protest and educational initiatives are intelligent. Here comes some smart videos about this matter. They are from the campaign "Tributação Transparente" (Transparency Taxation) and were awarded by the Atlas Economic Research Foundation.

The law project number 1.472 /07, called “De Olho no Imposto” (Watching out the taxes), establishes that all the invoices must compulsorily discriminate the value of the taxes levied on the consumption of products and services. The project was already approved by the Senate, and is now awaiting to be voted in the House of Representatives.

Nota Fiscal Paulista is a program from the government of São Paulo. By informing the CPF or CNPJ in the act of the purchase, consumers have returned 30% of the ICMS tax paid in the products. Because it encourages the consumer to ask for their invoices, the program enforces the establishments to issue the proof of their sales. This way, the state intend to prevent tax evasion.

Nota Legal is a similar project, but operating in the Federal District.

In the table below, you can consult the percentages of consumption taxes inlaid in some products.